New York – the City, the Big Apple, Melting pot, there are many nicknames for this city and its many wonderful attractions and people. When I first came to the city (about eight months ago), one aspect of the city that scared me in particular was the subway. I was afraid to go down into the belly of the beast. I wondered what was with all these lines – A,B,C,D, 1,N,Q,R….How do I get my ticket? How do I know whether I need to go uptown or downtown?

I constantly found myself on the wrong train, often heading in the wrong direction. I spent many a night waiting for the C, only to realize it don’t operate at that time. Yes, painful lessons but I am smarter for it today, well thats until I need to go to a new part of town. 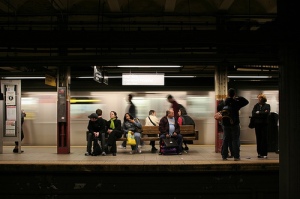 You see in India and Delhi in particular, we didn’t have a public transportation system as well priced, and well connected as NYC (more on this later). Most people have cars, and others take a rickshaw, DTC bus (best of luck getting on those), carpool or take a taxi (these are rather overpriced). In Delhi, the government would need to offer a significant cash reward for the middle/upper middle class to take the metro (started in 2002) and ditch their cars, so I find it all the more enthralling that the  subway is so popular in New York. But I digress.

Over the last couple of months I have come to admire the efficiency of the subway, and the diversity it holds in its narrow tubes and its many stations. On any given day, I see people from all around the world and hear several different languages. I had a professor that called the subway the ‘great equalizer’, and I could not agree more. In the subway, no matter the designation/title/bank balance we are all equal, jostling for a seat and therein lies its beauty.

4 thoughts on “Lost in trans(portation)!!”