I have been in India for less than 24 hours and I can see the tentacles of social media spreading across the media and the country. Whether it is press coverage, social activism or articles in print media, its impossible to go through your day without seeing a mention of Facebook or Twitter or an @ or # flashing on the screen.

It was interesting to see TV channels like Headlines Today prominently feature a Twitter ribbon on the screen, as well as prominently displaying the Twitter handle of its anchor. As far as I can remember, Twitter did not play such a prominent role six months ago, when I was last in the country.

Presently, the Anna Hazare led Anti-Corruption movement has taken hold of the country, and social media has played a vital role in drumming up support. The 74 year old social activist has spawned a new age in Indian activism. Anna has  4270 friends onFacebook, and his Twitter handle – Janlokpal – has 47,000+ followers and sends out a minimum of three tweets per minute, and Anna’s YouTube videos have been viewed over 100,000. I was keeping a close tab on the Twitter stream on Headlines Today yesterday and  saw the same tweets being repeated over and over again. This seemed a bit odd and made me wonder if a select group of tweets were picked to sensationalize the story. 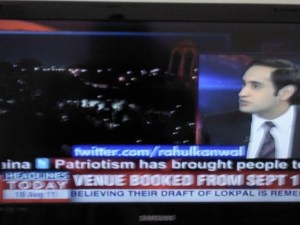 According to a Hindustan Times article, the movement has approx. 820,000 likes on Facebook for the movement. Not just that but the hash tab #isupportannahazare was the top trending topic in India for two days straight, and the India Against Corruption website has created microsite for eight Indian cities and NRIs.  However, in terms of integration the numbers are highly disjointed – there are over 500 Facebook groups and 25 Twitter handles in Anna’s support. Not just digital channels, but the movement is actively using its website, mobile/sms, videos and phone lines – talk about an integrated campaign.

Of course, you cannot mention India without mentioning Bollywood and Cricket in the same breath. Similar to the US, movie (Bollywood) stars such as Amitabh Bachchan, Aamir Khan and Salman Khan have taken to Twitter with gusto. However, there are a few individuals from corporate India, politics and social areana who are making their mark and followers on Twitter.

Narendra Modi, Chief Minister of Gujarat, is seen by many as the leading Indian politicians in the social media space. Modi has amassed 237k followers on Twitter and the visible face of political party BJP online. However, there are instances where politicians have had to reduce their Twitter presence due to pressure from their party. One such example is Shashi Tharoor– once India’s original tweeter cut back his online activity after being embroiled in the Kochi IPL row.

One of the most interesting uses of Twitter by corporate India is by Mahindra Group’s Vice Chairman and Managing Director, Anand Mahindra. He regularly retweets important news/updates from the Mahindra Corporate account, and also uses his account to deal with customer service issues.

Yet it is important to remember that these are the opinions of a very select (and small) group of people who can access the Internet and are connected to social media channels to post these messages on the go. There are varying statistics out there, but according to Internetworld, India has a paltry Internet penetration rate of  8.5% and 2.5% of the population is on Facebook. One can argue that with a population of approx. 1.2 Bn that is a sizable number – Yet as a reflection of the overall country, we still have a long way to go before opinions on social media reflect an adequate reflection of the voice of the masses.

What is your opinion on the rise of social media in developing BRIC countries? Do you believe that social media channels such as Twitter offer a real medium to spread information or are currently being used to bolster the agenda of individual groups?

11 thoughts on “Social Media and India”