Have you ever whipped out your phone because a friend or colleague asked how your children were? or fumbled for your iPhone to show the pictures of your new home or vacation photos?

We all love to share images – it’s easy and fun to show a picture than to describe something. Odds are you wouldn’t do the moment justice by simply describing any of these events. So if we talk about a use case, in my mind that is the key to Pinterest, an online pinboard that allows one to organize and share images.

The site allows users to collect photos and link to products and images they love. They share images by creating their own pinboards and follow boards of other people whom they find interesting. The site is currently in closed beta, so you would need an invite, but current users have unlimited invites to give out.

What separates Pinterest from other social networking sites is that its super easy. You can use the site’s browser bookmarklet, website buttons or iPhone app to “Pin” sites and content to your topic-organized boards. Pins appear on those boards as images culled from the content you Pin. Your ability to pin items is as infinite as your imagination, the site offers 30 categories and if you cant figure it out just use ‘other’.

Now to be honest, I did not understand what all the hoopla was about. Users were just pasting pictures on to these boards. Well that was before I posted my first set of pin, picture to my inspiration board. What happened next was truly amazing, emails started flooding my inbox.

There were all these people re-pinning and eventually liking and following my pins. Initially I felt a bit overwhelmed by all the emails. But then it struck me – this is what social media is all about, its about connecting with people and sharing. All these people, saw an image that they found interesting, fun, fascinating, inspirational or just plain crazy. In some way it spoke to you, made you think, laugh or feel something. Well at least to some degree that they decided to give it some sort of credence. The ability to get an immediate response is what makes Pinboard addictive. You post a picture and you immediately start getting a response. So while on Twitter you can go hours without a retweet or mention or favorite, posting a pin has an almost immediate result. Now you can argue that Twitter wasn’t built for the express purpose of immediate feedback, unless you’re a celebrity. But there is something wonderful about a total stranger, saying yup that’s cool or commenting upon a picture.

Pinterest recently crossed the 11.7 million unique monthly U.S. visitors, according to data obtained by TechCrunch, “crossing the 10 million mark faster than any other standalone site in history.” Visitors spend an average of 98 minutes per month browsing that site. That is huge for a social network that wasn’t even on the radar a year ago.

According to Experian Hitwise, the website is especially popular among women, who account for 58% of Pinterest’s traffic and skew young between the ages of 25 and 44 (59%). While, there is content across a range of categories, the site is dominated by images featuring home décor, crafts, fashion, and food. Moreoever, the site is a hit with audiences in California and Texas and over-indexes on share of visits from states in the Northwest and Southeast. Experian also found that Pinterest visitors also over-index for the Hobbies and Crafts category (versus the online population). 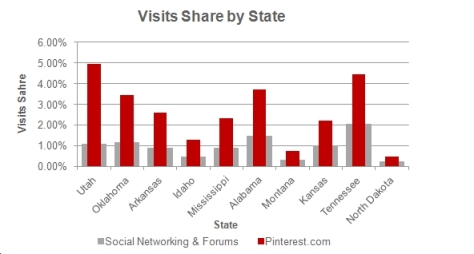 Gaining ground on the competition

Pinterest’s visual editorial board is easy on the eyes and a refreshing change when compared to other social networks cluttered with advertising. But its not like the founders have lost track of a very important goal. Pinterest has a strong business model already in place and a monetization strategy. Considering it took Facebook years to generate revenues and Twitter still struggling, this is refreshing. Traffic on Pinterest has increased more than fourfold between September 2011 and December 2011, with 7.51 million unique visitors visiting the site in December alone. Moreover, the focus on visuals is helping Pinterest fast become a top five referrer for several apparel retailers. 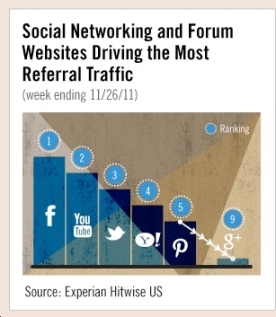 The site is apparently using a service called Skimlinks to add affiliate links to products and thereby  adjusting and tracking the links attached to user-generated pins. Mashable states that “Publishers from small blogs to bigger companies such as Pinterest work with affiliated partners so when a link directs a visitor to a retailer involved in the affiliated network and makes a purchase, the merchant will pay the affiliated network, who will then pay the publisher. Skimlinks takes about 25% of the generated affiliated revenue.” The advertiser or retailer only pays for what has been purchased.

Smart brands and publishers are fast figuring out a use case for the network and jumping right in. One such example is the The Wall Street Journal, which is using Pinterest And Instagram To Cover Fashion Week. According to Business Insider, WSJ has deployed nine journalists to cover Fashion Week in New York, all armed with iPhones and Instagram accounts. The Journal is automatically pulling in their tweets and images into its website (shown below) and featured on Pinterest. This allows them to attract a whole new segment who might not read the journal. 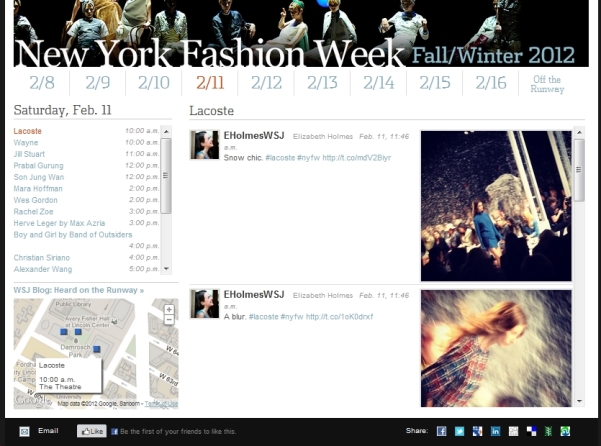 WSJ presently has 734 followers, 407 Pins, 19 boards and 77 likes. They have boards featuring the New York Fashion Week, WSJ Headcuts, Front pages, WSJ The Magazine and many more – basically one of each segment of the paper and other key additions. The boards themselves vary in the level of activity – i.e. likes, comments and repins. 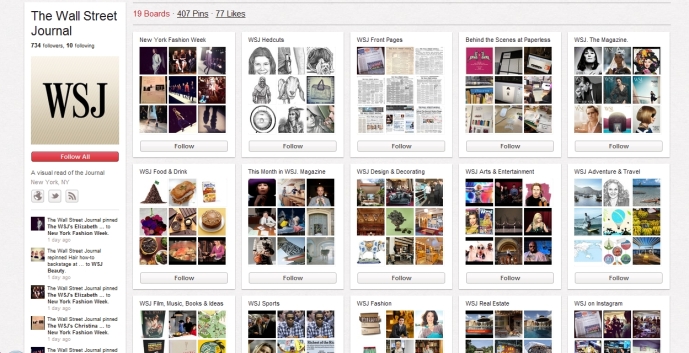 I will be updating the article with more examples of brands leveraging Pinterest over the next week days. In the meantime, chime-in through the comment section and let me know what you think of Pinterest? Is it just the latest social media fad or does it have the ability to stick around for a long time? Are there any users or brands that you think is using the website well and how are they integrating it with other platforms?

Until then keep pinning.