People who know me know that I am self proclaimed nut about social media and entertainment. Growing up in India I would wake up at ungodly hours to watch the Oscars and the Golden Globes. I wanted to be the first to find out who won. Unfortunately, none of my friends were into waking up at 5am. So I had to wait a few days until I could discuss it. For me that was the definition of torture. Imagine in this day and age waiting days to discuss plot lines or key moments from your favorite show, event or sporting event. Are you kidding me? It would already be old news.

Bolstered by mobile, Social Media allows millions of people to simultaneously share an experience. If something shocked/scared/made you laugh or if you were mad at a development, you have the opportunity to talk about it or simply hear if others felt the same. This is one of the reasons why I love Digital Media, particularly Social Media and its ability to tap into the collective and ever evolving chatter.

Social Media has become an essential companion to watching TV. Its almost a given that I watch TV with my tablet and cellphone (in case one loses power or if I want to monitor multiple hashtags).  During the recent Game of Thrones finale episode – I found myself checking reactions at all the key moments. So much so that I need to watch the episode again. For instance, during The Hound and Brienne’s epic fight scene, I was shouting at the screen but I also kept checking Twitter.

Post the original airings, shows gain a second life. You can delve deeper into plot lines, read reviews or view GIFs. Check out the amazing content being generated on GOT on Twitter – #GameOfThrones.

Social Media penetration rates are overwhelmingly high, particularly among key ethnicity’s and demographic groups. According to Pew Research, as of September 2013, 73% of online adults use social networking sites. Fully 40% of cell phone owners use a social networking site on their phone, and 28% do so on a typical day. While, I think the last number is on the lower side, the fact is that social media is permeating itself into our lives. It has been for some time now, but what has altered its its level of influence in terms of purchasing decisions, brand opinions/ affinity, and its role in the path to purchase.

Social Media users are highly savvy, they can sniff out authentic messages, and they constantly leverage the medium to enhance their experience. Twitter has clearly taken the lead in shaping the TV – social relationship. They have snapped up companies such as Bluefin, Trendrr, and most recently SnappyTV, and built relationships with companies like SocialGuide. These many acquisitions has helped them develop an ever evolving tool that is not only robust but also smart.

Take the World Cup, I logged into Twitter and was provided World Cup stats on the right-hand side railing. Click to view the content. The event even has its own dedicated homepage, and you can follow teams, people, see the score, and view photos and pictures. Ingenious! If you’re on the road or simply want to dive into the event this is the perfect platform to stay connected. 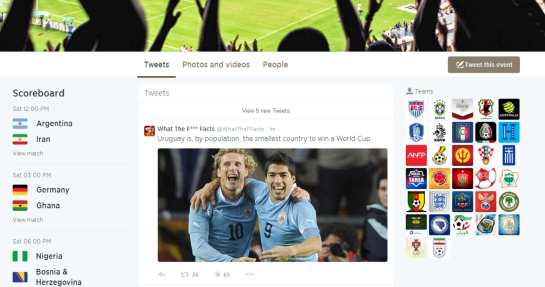 Twitter had created a dedicated section focusing on the World Cup. https://twitter.com/hashtag/WorldCup. One of the many ways they are building a partnership with events and TV.

One of the many questions, marketers and advertisers constantly discuss in relation to Social Media is the ROI. While research in the space is on-going, Twitter recently released findings from a study it conducted in partnership with SMG. The results show that the use of Twitter increases engagement, awareness, and perhaps most importantly sales.

According to the report:

Twitter + TV = Increased Brand Awareness Versus TV Alone. For brands that used Twitter alongside their TV advertising, the study found on average a 6.9% increase in awareness for exposed audiences and significant increases for exposed and engaged audiences across awareness, intent and favorability measures.

Twitter Amplification = Sales Lift. For the brands that measured sales impact, they saw sales increases of 4% on average in households exposed to ads on Twitter and TV versus just TV ads alone.

I am sure in the coming days more note worthy data points will be released.

The above is not to say that other social networking platforms do not offer equally powerful mediums for TV conversations. What is important to note is the environments that helps fuel and sustain such chatter. For publishers, marketers and brands that is the key question.

So what are your views on Social TV? How do you use Twitter/Facebook/GetGlue while watching TV? Chime in with your thoughts.